I recently got the SPG Amex card with the 25,000 bonus points. They are now offering 35,000 SPG points. I used the Amex live chat feature to see if they would pony up the other 10,000 points or would call my bluff on canceling my card. Here is what happened 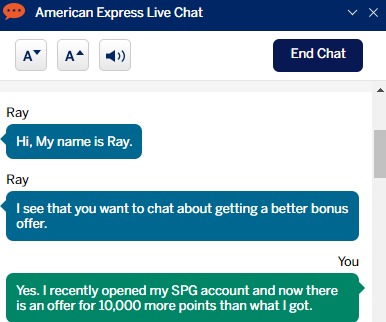 Oh well. I’ve never had good luck with American Express. I guess I need to keep my business with Citi, Chase and BofA who treat me way better.

I think we may be on the downhill side of the golden age of mile hacking or whatever you like to call it. The credit cards are getting tougher on sign up bonuses. The airlines and hotels are devaluing the awards and making them more restrictive. There seem to be less and less free miles out there. You know those “follow us on twitter” and get 500 miles, etc. #repeatandchurn.

My favorite deal in the past was the US Airways Grand Slam events. It’s how I got started in “the game”. I miss it soooooo much. Sure earning the miles was the goal but it was like a worldwide scavenger hunt to figure out how to rent a car for 5 minutes for like $15 to get a hit or how to buy that $2 cat collar on skymall when you don’t own a cat. It was just fun. I really thanks Mommypoints for turning me on to that fun time.

I think the miles and points world is changing. It had to. Technology is catching up to the error fare deals, OTA’s and app-o-rama’s. The bright spot left is maybe just doing old fashion mileage runs. Not because they are a good deal for the miles you earn but because they help you earn status and miles and go places you want to go. We’ve become addicted to the travel in nice seats. Now it’s about how to keep traveling. Sure we’ll get a few drive-by deals and I pity the poorly organized promo’s that we will be sure to exploit. But it’s like a rolling or flying party. We have our own rock stars (Gary, Seth, Summer and many others) and we all seem to want to fly to exotic locations in big front seats.

I’ve earned and burned over 1,000,000 AA miles in the past few years but only 100k or so are EQM’s and sitting on a lowly Gold status. Maybe I’m going about it the wrong way…Stay tuned.

Many folks applied for USA passports in 2006 due to new requirements. There is also a surge in new applications ahead of the 2018 Real ID Act requirements so fast forward to 2016 and guess what? That flood of new passports in 2006 are expiring and a bunch of new applications is making it a busy time at the U.S. Passport office.  They are urging individuals with passports expiring to renew them now. Renewals will likely take 6 weeks or more.  Also if you are planning travel out of the country remember that you typically need at least 6 months of validity on your passport before you are allowed to travel to most places.